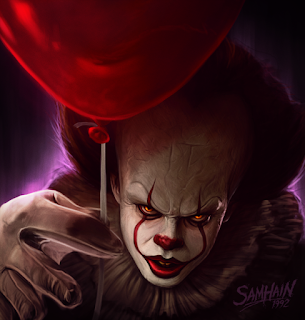 [The following review may contain spoilers]

So reviewing a film is difficult, gush and risk overdoing it, but under do it and it leads to indifference.
Let me start this review by saying, IT is absolutely 100% fantastic. Currently for me, my film of the year.

Growing up, my mum read a lot of Stephen King books, and so I found the book IT at a younger age. Upon reading i was immersed in this dark cloud covered Derry community, plagued by a recurring shapeshifting nightmare. The book became one of my favourites.
This however lead to a problem, the miniseries version of IT starring Tim Curry.. I didn't like it at all. Although Tim Curry and Co did a great job with the tools at their disposal, this version did not fit with the Derry and Pennywise I had in my head.

The kids in the film have been cast perfectly, each of the 'Losers' gets enough time on screen to showcase personality and development. They as a unit have a very 'Stand By Me' feel and camaraderie.
Each young actor performs their role with aplomb and vigor. It's nearly impossible for me to single out any in particular but would like to give special praise to both Jaeden Lieberher (Bill Denbrough) and Sophia Lillis (Beverly Marsh) for not only performing so well but for the two emotional arcs they portray during the movie.

Now lets talk Bill Skarsgård.
Bill will be immortalised in horror history for this portrayal of IT/Pennywise. The man is nothing short of amazing, his presence, his voice and vocal stylings, the precise and almost choatic movements he uses, hell the fact that during one scene he screams, drools on and laughs maniacally in the face of one of the children.
The fact he has taken on a role made famous by Tim Curry and in my opinion eclipsed him is remarkable.

The film itself is utterly wonderful, jumps and scares melded with sentiment and a story of friends.
The book has a few scenes left out of the film, but the flow and pacing of works well without.
The most notible thing left out, for me, was the absence of Maturin the Turtle.
Maturin is IT's natural enemy and represents creation in opposition to IT's destructive/consuming nature.. In the book Maturin appears during the Ritual of Chüd to advise Bill on how to defeat IT. The ritual and Turtle are both left out (assumingly to avoid the Macroverse and Dark Tower tie ins) but we do get several nods to the Turtle, both when the kids are swimming at the quarry and the lego toy Bill finds in Georgies room.

I cannot say enough great things about the film and frankly do not wish to spoil it for new comers.. as Pennywise himself says, 'they all float down here' expect IT to float to the top of the box office and film awards.
You'll never see a single red balloon the same way again.