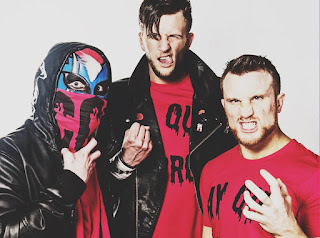 Im an advocate for british wrestling. I love wrestling in general, but am especially proud of our home grown talent.
Now UK wrestling is steeped in tradition from the days of Les Kellett and Mark 'Rollerball' Rocco to The British Bulldogs, Robbie Brookside and William Regal, we have a proud history of producing some amazing workers.
With all due respect to those that competed, the WWE UK tournament didnt show the vastness of what we have, and while the guys involved have rightly used it to springboard themselves, I want to talk about the unsung, unknown or upcoming UK talents.

Today you get 3 for 1 as I spotlight a tag team (s) - CCK Chris Brookes, Kid Lykos and Travis Banks.
I will start simply by saying I love this group, they are innovative and exciting and could break out to much bigger things in 2017, but what they also possess is the ability to be likable, whether portraying heels or not, and that is impressive.

I first encountered Chris Brookes a couple of years ago, I'd heard good things about him and had seen some of his work online and was very impressed. I must note that he is a completely different prospect live, he portrays (very comfortably) a heel in the classic old school obnoxious way, which personally I really like. He is also a marvellous technical worker and carries his submission skills with complete aplomb, but to be honest Brookes can do pretty much anything including high flying and intense strikes making him a supremely versitile all-rounder.
Although midlands based he is a journeyman throughout the UK, he has worked for most promotions, even appearing for Chikara.
Having seen him compete against people like Kassius Ohno, Pete Dunne, El Ligero, WWE UK champion Tyler Bate and (my favourite female wrestler in the UK) Nixon Newell (amazing matches btw) its safe to say Brookes deserves all of the plaudits he is getting.

Kid Lykos, much more enigmatic than his very out spoken partner, he has the innate ability to hit you wherever you are in the ring. Any position and at any angle and he will manage to hurt you.
The high flying Lykos shows absolutely no fear whether leaping from the top rope or outside the ring or trading strikes with guys much larger than himself.
The masked man is making quite the name for himself with his performances up and down the country for various promotions.
The self styled 'Problem Child of Professional Wrestling' is a breakout star in the making, with his very recognisable wolf mask and high impact style, it wont be long until the name Kid Lykos is synonymous with UK wrestling.
I've been enthralled watching him work, and urge all to watch him at a live show.. you may even see a brainbuster or two..

Now there is a 3rd CCK member i must mention and whilst not British, is definately an adopted Brit, and is the awesome Travis Banks.
Now Travis is a a native of New Zealand and is already recognised as one of the brightest international free agents around. The hard hitting 'Kiwi Buzzsaw' is a staple of the british scene and is one hell of a natural talent.
He is a superb all rounder, that is at home on the mat or flying, and is getting rave reviews on his matches here in the UK.
A wonderful hard working talent that very much earns his great reputation, having battled the likes of Pentagon jr. Ricochet, Will Ospreay and Marty Scurll in excellent showings. A complete workhorse, constantly upping his ring work and becoming better match by match, a star in the making, a very intense star.
If you dont know Travis.. you will.

In short, individually they are fantastic but together these guys are excellent. I'm loving their work right now, and encourage wrestling fans to check them all out and catch them live.
Follow them on twitter and get on board with CCK.
You should watch them online, go to a show, buy some merch and frankly support this awesome UK team. You will not regret it.
Go do it now. #CCK