April 13, 2017
The first of my new live reviews begins down in New Cross, London.
Essex based rock band Different People are playing tonight and I intended to tell you all how they did.
Firstly let me say that Different People aren't just a rock band, they play music that is rocky sure, but its a lazy classification. They blend rock with a punk spirit, heavier moments akin to the early 90's grunge scene and with massive soaring melodies, so in a word they traverse genres.
The band, who are playing their first proper gig with this new line up, take to the stage and without hesitation delve straight into their opening song and the crowd are sucked in immediately.
Frontman Matthew switches his vocals from strong and melodius to harsh and screams and shouts blending the latter effortlessly into the bands mixed repertoire.
The band are incredibly tight across the board, killer riffs, strong basslines and pounding drums. The stand out moments come in the form of forthcoming single 'Best Before, Used By' which encapsulates a huge anthemic chorus that grabs you by the throat and shakes you and will not let go, and amazing set closer 'Tango' which this reviewer personally wants to hear again, a multi-layered beast of a set closer that is the perfect end to a killer set.
If i had one gripe about this set, the only thing would be i dont think they got long enough to play! Most bands go through an awkward phase with line up changes, Different People however have used this rebirth to light a fire under them. Much to their credit.
The band made a suitable impression and I for one will be at future shows enjoying the energy and fantastic music they create. The band have been impressive on this show and i can only see better and bigger things occuring, i urge anyone to check them out, like their pages and keep an eye on what comes next.
The band are gearing up to drop their new music video 'Best Before, Used By' shortly through Backwater Channel Records.
This band are built and designed for bigger things so I suggest you catch them live locally whilst you can.
They currently will be playing at:
The Attic/The Forum, Hertfordshire on 27th April and Fiddlers Elbow on 14th May. 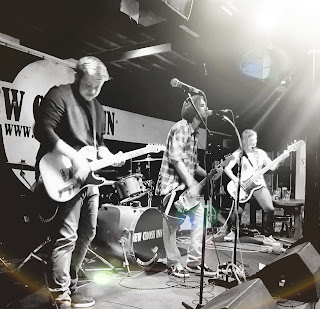 September 11, 2017
[The following review may contain spoilers] So reviewing a film is difficult, gush and risk overdoing it, but under do it and it leads to indifference. Let me start this review by saying, IT is absolutely 100% fantastic. Currently for me, my film of the year. Growing up, my mum read a lot of Stephen King books, and so I found the book IT at a younger age. Upon reading i was immersed in this dark cloud covered Derry community, plagued by a recurring shapeshifting nightmare. The book became one of my favourites. This however lead to a problem, the miniseries version of IT starring Tim Curry.. I didn't like it at all. Although Tim Curry and Co did a great job with the tools at their disposal, this version did not fit with the Derry and Pennywise I had in my head. Skip forward to 2017 and welcome to Derry, Maine.. A picture esque quaint town with a terrible millenia old evil living benethe it. Director Andy Muschietti breathes new life into a horror classic creating somethi
Post a Comment
Read more

April 22, 2017
Spotlight: CCK Im an advocate for british wrestling. I love wrestling in general, but am especially proud of our home grown talent. Now UK wrestling is steeped in tradition from the days of Les Kellett and Mark 'Rollerball' Rocco to The British Bulldogs, Robbie Brookside and William Regal, we have a proud history of producing some amazing workers. With all due respect to those that competed, the WWE UK tournament didnt show the vastness of what we have, and while the guys involved have rightly used it to springboard themselves, I want to talk about the unsung, unknown or upcoming UK talents. Today you get 3 for 1 as I spotlight a tag team (s) - CCK Chris Brookes, Kid Lykos and Travis Banks. I will start simply by saying I love this group, they are innovative and exciting and could break out to much bigger things in 2017, but what they also possess is the ability to be likable, whether portraying heels or not, and that is impressive. I first encountered Chris Brookes
Post a Comment
Read more