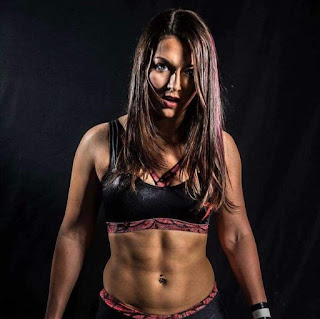 My Spotlight series continues, this time, Nixon Newell.
I want to begin by saying, just simply, Nixon Newell is fucking awesome.
Let me elaborate a little, Nixon is a welsh girl who is an amazing wrestler, persistantly putting on excellent matches and gaining an ever growing fan base.. and rightly so.
I am a huge fan of Nixon, she has impressed me massively, I'd go so far as to say that she is my favourite female worker in the entire industry today.
To my knowledge Nixon has been competing for 3-4 years and already has a wealth of experience, crossing paths with many of the top female names in wrestling, notable opponants include current Impact Knockouts Champion Rosemary, Candice LeRae and Kimber Lee.
She has also teamed with and fought many male wrestlers too including Pete Dunne, El Ligero, Mark Andrews and WWE UK Champion Tyler Bate. Personally I recommend you check her (forever) fued with Chris Brookes out, its utterly fantastic.
Nixon currently employs a front flip piledriver dubbed 'The Welsh Destroyer' to finish her opponents with (sometimes spectacularly from the top rope), and also uses a shining wizard known as 'The Shiniest Wizard' and it most certainly is.
Even just at the start of her career, Nixon has already competed all over the UK and had a successful trip to Japan, worked for various promotions and been highly spoken of in all wrestling circles. Although she primarily works as a face, i have been privelaged enough to have caught her heel work too.. was sensational, perfect psychology and performance as always.

For me, Nixon is the embodiment of hard work and determination, proof of what can be achieved with the right attitude and work ethic.
She has a fearless demeanor and never holds back in any match, a quality i personally admire greatly.
Go catch her at a show, trust me its worth the price of admission.
In a time where womens wrestling is every bit as valid and hard hitting as there male counterparts, we look to extraordinary athletes for the future. To carry the torch forward and show the world that wrestling in 2017 isnt about gender or size, but about passion and heart. In that mindset Nixon Newell is my torch barer for the future and i admire her for it.
With WWE announcing a Womens Open Tournament this summer, Nixon should be first name on the list.