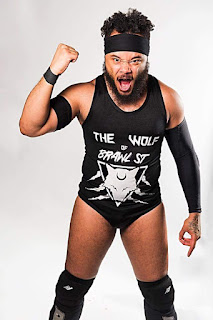 My spotlight series continues and its current subject may be one of the best kept secrets in UK wrestling.
I present to you all Alexander Roth.

In the UK scene it can be difficult to stand out, sometimes being a great wrestler is all well and good but if you dont carry yourself correctly you wont get over. Roth is a hell of an in ring talent mixing brawling, technical prowess and aerial skills, but more important is Roth's charisma, and he has it spilling over.

'The Wolf of Brawl Street' has been tearing it up all over the UK and has begun venturing into europe. Personally I was a fan after the first match I watched him compete in.
Roth has the ability to adapt to his opponants style and excel, having also performed in various last man standing and ladder matches. Each time coming up with unique and innovative attacks, as well as his usual arsenal, which includes his fantastic Nightfall DDT.

Having watched him in the ring I can attest to being impressed with the work ethic, but this translates to outside the ring too, wrestling and injuries come hand in hand, but having seen first hand Roth return from injury more vicious and more hungry to compete just shows me how determined he really is.

The London based 'Wolf' oozes confidence and performs incredibly well as either face or heel, cuts promos that spin from tongue in cheek to very agressive and is able to keep audiences attention without trying, which is not easy.
Roth employs a hard hitting smash mouth style that has seen him go toe to toe with some amazing wrestlers, recently including veteren Doug Williams.

If given a larger platform to compete on he could be one of the top names in the UK, he presents himself differently to anyone working here at the moment and I have no doubt would make believers of people seeing him for the first time.
I'd advise people to follow him on social media, attend shows to see him or check him out on Youtube.

Alexander Roth is a name many are learning and it will not be long until he breaks out to bigger things. Promoters across the UK should be paying attention as he currently accepting bookings and will add quality to whatever card he performs on.
Remember the name. You never know when the Wolf will be at your door.

Find the Wolf of Brawl Street at: