10 Songs That Changed My Life 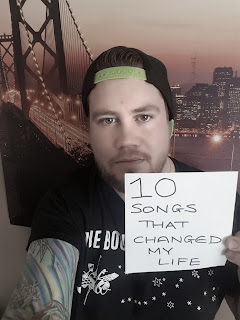 The title of this one is fairly self explainatory, but I will tell you exactly what the title means.
During our life we become exposed to all kinds of music, some of us avid fans, some not so much. We hear thousands upon thousands of songs and yet, some songs become special, synonymous with people, places or events in our lives.
I am going to break down the amount of sentimental songs I love into just 10, no particular order, just 10 songs that for one reason or another have changed my life.
Strap in, lets begin..

Anyone that knows me knows I am a huge pop punk/punk rock fan. Obviously there needed to be an origin point and as best I recall this was it.
6 or 7 years old and given a cassette tape *google it if you are too young to know what that is lol* of Green Day's Kerplunk album, the opening track literally grabbed me and refused to let go, '2000 Light Years Away'.
I fell in love with the chorus, melody and crunchy uncomplicated sound of it, Billie Joe Armstrong's snotty punk vocals lamenting for the girl he wants.
Green Day obviously went on to record much better songs, but this one helped open the floodgates for me. I find it heartwarming that the song still to this day gets a feature in their live set too.

It was painfully obvious to anyone that knows me that a Less Than Jake song would make my list, as my favourite band it becomes incredibly difficult to narrow it down to one song.. but I've chosen 'The Last Hour Of The Last Day Of Work' from 2000's 'Borders and Boundaries' album.
The album itself remains probably my favourite but the reason I picked this track is because upon first listen, its subject matter really spoke to me. In my opinion LTJ have always been criminally underrated song writers but especially lyrically.
'So when ambition, turns into competiton, I'll never be the better man'

I've had my fair share of dark times, been to some awful places within my own mind, and during those fights music became a hand that reached down and pulled me out of the hole I was stuck in *and help of course, from some good friends*.
InMe released an album called 'Daydream Anonymous' at the exact right time for me, it covered many themes, but 'Turbulence' was the song I continued going back to, I heard it through ears longing for hope, and it gave me that.
Dave Mcpherson's lyrics have always been fantastic, this album and song however took it to a whole new level. A song that kept a heart beating, is a song to never be forgotten. So a big thank you to Dave and InMe.

4) Bad Religion - 'I Want To Conquer The World'

During my initial foray into punk rock, I came across Bad Religion.
The band really opened my eyes to the messages you could convey within music and issues that you could rally about passionately.
Using music as a platform to address real world problems is absoletely what punk rock is about.. Bands like Bad Religion really influenced how i create music and 'I Want To Conquer The World' was the first track that opened my eyes to how to do that. Sure they've written better, but this one will stick with me.

Growing up me and my friends used to hang out, went to many house parties and did the usual rites of passage.
'Enema Of The State' was the soundtrack to a very large chunk of that, there were many quality songs on that album, however 'Going Away To College' was one that always stuck out.
Songs about love and growing up are staples for most of pop punk but Blink 182 do it better than most. This song still graces my playlist regularly and everytime reminds me of long summers and the friends that helped me become who I am today.

Firstly I love the movie The Goonies, Secondly I love the band The Ataris, so when The Ataris write a song based on The Goonies, chances are it would make my list.
The song is catchy, upbeat, earnest and sincere, all things that The Ataris encapsulate, but the song makes me feel a renewed sense of optimism and almost young and carefree again. For me this is exactly what punk rock does, privides energy and nostalgia.
I love songs that create sentiment, this one floods me with it, seeing The Ataris live again after 10 years and closing their set with this song took me from standing in a field in 2017 back to my bedroom in 2003 playing the song for the very first time, and that is a remarkable thing.
I will always find time to go back to this song, for me, as stated above its timeless.

7) Spitalfield - 'Stolen From Some Great Writer'

I found Spitalfield by accident, on a free giveaway cd from Victory Records.
Upon the release of their album 'Remembering Right Now' I discovered the song 'Stolen From Some Great Writer'.
It was smooth and controlled, big riffs, huge chorus and lyrically great.
I myself have performed this a fair few times and continue to thoroughly enjoy the song, its a song that made me think more about the ways I write a song, or that not all songs need to be immediate in energy but can be a slower build and create depth.
The song itself made an impact on me and simply for that reason has earned its spot on this list. Check it out.

Simply put, my current favourite UK band. Upon first meeting them many years ago, this was the song that led to my long standing following of the band.
The song kicks ass, aggressive shouty vocals merged with clean dual vocal overlaps and a big soaring chorus.
The band have become incredible and amazing songwriters and while this song may have fallen away into their back catalogue, it left a large impact on me.
Without hearing that song I'd have not met the band or found them as early on as I did. Whether full band or acoustic this song is rad, it has a massive impact and opened my ears to band I now adore, I'm glad I heard this and found them when I did, the journey with them has been great.

As with number 8, this is a recent one but it still makes the list.
Neck Deep are a great band, they resonated with me straight away, strangely though also with several of my close friends, the band now make me think of my friends and this song especially.
'Lime St.' is an awesome upbeat song, its a beast live and equally sounds wonderful stripped down. The song has been on my playlist since the first day I heard it, and quite honestly I cannot hear it without singing along, the mark of any great song.
The song itself is about losing connection with someone, and about regret, but its wrapped up in a uplifting melody and tight musicianship.
The song keeps me happy, and reminds me of friends regardless of the subject matter.
Cannot wait to catch them live again.

The most strange on my list. Beautiful and simple. If ever I need to think or relax or cry I listen to this. I wont say to much about this one.. just listen to it, absolutely stunning.

Thanks for reading. Perhaps it will encourage you readers to compile your own lists.
Later days x