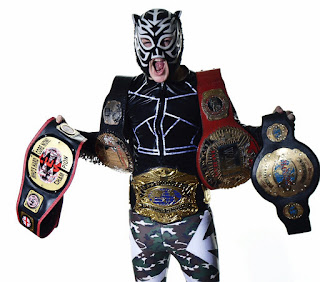 The next edition of my spotlight series and I prepare to tread on hallowed ground, by writing about one of the members of THE wrestling dynasty here in the UK, The Knights.

Now let me precursor this by saying the Knight family rightly have full respect of professional wrestling, from the heads of the family Ricky Knight (Wrestler and Owner of WAW) and Sweet Saraya Knight (Wrestler and Owner of Bellatrix) to their children Roy and Zak (The Hooligans) and Paige (former NXT/WWE Womens Champion).
I could and should spend hours gushing and paying tribute to each of these individual talents, however today im looking at the future.. the 3rd generation, I present the outstanding Ricky Knight jr.

Lets just start by saying that RKJ is 17 years old, but at 17 and he already had a wealth of knowledge and experience, he constantly performs at an incredible level and is without doubt one of the future stars of the UK wrestling scene.
Having been watching him perform over the last year, I must admit to being impressed, not just with his in ring performance but his constant professional attitude and the way he carries himself.
RKJ likes to mix his wrestling style, adapting his offence against his opponants, he does however use an awesome 450 Splash and Yakuza Kick to devestating effect as part of his usual moveset however for me RKJ shines when flying through the air, having utilised swanton bombs, missing dropkicks, springboard forearms and moonsaults to wow audiences.

He has mixed it up with plenty of talents including veterans like Jonny Storm, Jody Fleisch and El Ligero, never losing a step and constantly gaining fans in the process.
At a time where the UK wrestling scene is being viewed by the world with eager eyes and the plethora or international talent hits our shores, performers like RKJ will be in high demand and continue to excel his reputation with 5 star matches.

Coming from a family rich in wrestling heritage can be difficult, trying to create your own name in the business, to stand out and with pressure to represent the name with as much pride and talent as those that blazed the trail before..
Its safe to say RKJ does it already. He is already a sensation and will continue to grow, the sky is the limit for someone as talented as him and he will wave the flag for UK wrestling for years to come.

Go to a show or follow on social media, either way Ricky Knight jr. has big things ahead of him. The future is now.